TORONTO, Ontario, May 24, 2022 – 1911 Gold Corporation ("1911 Gold" or the "Company") (TSX-V: AUMB) (OTCQX: AUMBF) is pleased to announce that it has completed its first phase of 2022 exploration drilling, testing multiple high-grade gold targets at the 100%-owned Rice Lake and Apex (Snow Lake) Gold Properties in Manitoba, and will initiate the 2022 field exploration program in the coming weeks.

In Q1-Q2 2022, the Company completed 9,202 metres of exploration drilling in 35 drillholes, testing 18 targets across four project areas on its Rice Lake and Apex properties in Manitoba.

In addition, maiden exploration drilling was completed on several new targets at Tinney and Bidou, and at the Wallace project where the Company tested five targets within rocks equivalent to the prolific Balmer assemblage in the adjacent Red Lake district. These ‘Red Lake-style’ targets occur in a regional-scale fold hinge adjacent to the Wanipigow fault, comparable to the large-scale folds and faults that localize gold mineralization in the Red Lake district, most notably at the Red Lake mine and at the Dixie project.

At the Apex property near Snow Lake, Manitoba, drilling focused on previously-untested large-scale chargeability anomalies identified by the Company’s induced-polarization (IP) geophysical survey in 2021. Three separate IP targets were tested, as well as a quartz-sulphide vein system that had previously been tested by only shallow close-spaced historical drilling.

“The Company is pleased to have drill-tested all but one of its planned targets in Q1-Q2 2022, and is strongly encouraged by the structures, alteration and quartz-vein systems observed in drillcore. With all samples now at the assay laboratory, we look forward to releasing new drilling data as final results are received for each project, while also commencing our 2022 field exploration program intended to advance both existing projects and initiate fieldwork at several new projects with potential for large-scale gold systems”, stated Scott Anderson, Vice President, Exploration.

Exploration in 2022 will involve mapping, sampling and surficial geochemistry to further advance the Tinney, Bidou and Wallace projects (Figure 1), where exploration continues to reveal evidence of gold systems with significant scale potential. Following reconnaissance and compilation work in 2021, fieldwork will also commence in three new areas along the crustal-scale Wanipigow fault, including the Palomar, Gold Creek and Whales projects. At the latter project, 2022 fieldwork will include a very high-resolution airborne magnetic survey to infill a gap in the regional dataset and upgrade existing low-resolution data. 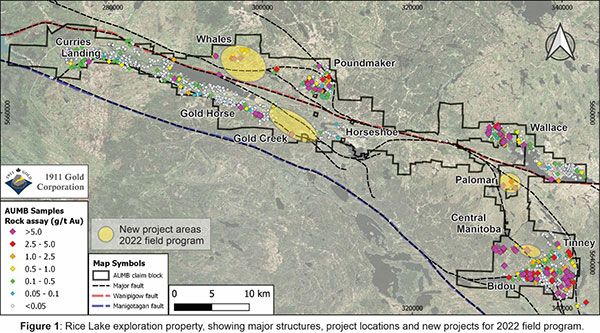 Drill targeting is also ongoing for the Curries Landing project in the western portion of the Rice Lake property – an area with minimal bedrock exposure and no record of previous drilling. This project is centred on a regional-scale fold of a major geological contact adjacent to the crustal-scale Wanipigow fault. Targeting is utilizing new data from the 24-line-kilometre IP survey (Abitibi Geophysics’ OreVision® system) completed in January, coupled with the high-resolution UAV magnetic data previously acquired by the Company, to identify large-scale structural targets within this untested regional-scale fold.

In addition, at the Central Manitoba project (site of the historical Central Manitoba mine, which produced approximately 150,000 ounces of gold at an average grade of 11–12 g/t gold), underground workings and previous drilling are being compiled, georeferenced and modeled, and augmented with new field data, to constrain drill targeting at depth below historical workings. Despite extending in length over two kilometres at surface, the vein systems at Central Manitoba were only mined to a vertical depth of approximately 100 metres, which is highly unusual for gold deposits in the Rice Lake and Red Lake belts which typically extend to depths at least as great as their surface footprint, suggesting untested potential at Central Manitoba.

In Q2 2022, the Company also plans to commence exploration on its Denton-Keefer property located 30 km southwest of Timmins, Ontario, along the prolific Porcupine-Destor fault. The Company has contracts in place for the acquisition of new high-resolution datasets for the property, including orthophoto, LiDAR, magnetic and electromagnetic surveys. These datasets will provide a strong foundation for exploration planning and drill targeting at Denton-Keefer; additional details will be provided once the surveys commence in late Q2 2022.

The 100%-owned Rice Lake Gold Property is located on the Rice Lake greenstone belt, which is the western extension of the prolific Red Lake belt in adjacent Ontario, and is situated along the same fundamental crustal-scale structure—an ancient plate margin—that produced the exceptional gold endowment of this district. The Company’s consolidated land position, totaling over 58,000 hectares after recent strategic acquisitions, covers a 70-kilometre-long section of a crustal-scale ‘break’, referred to as the Wanipigow fault, that represents a principal control on orogenic gold in the Rice Lake–Red Lake district.

The 100%-owned Apex Gold Property, totalling 2,200 hectares, is located in the Flin Flon–Snow Lake greenstone belt, which is one of the most prolific mineral belts worldwide and hosts the 1.5-million-ounce New Britannia gold deposit, located 14 kilometres northwest of Apex. Gold deposits in the district are spatially associated with the north margin of the belt; the Apex Property is situated between two crustal-scale faults cutting this margin, representing a highly favourable setting, also currently being explored by Kinross Gold at their adjacent Laguna property. In addition to gold, the Apex property is prospective for lithium and lies adjacent to ground currently being explored by Foremost Lithium and Snow Lake Lithium.

The 100%-owned Denton-Keefer property, totalling 2,100 hectares, is located 30 kilometres southwest of Timmins, Ontario, in the Timmins-Porcupine Gold Camp of the Abitibi greenstone belt – one of the richest goldfields in the world with over 70 million ounces of past gold production from deposits arranged along the crustal-scale Porcupine-Destor Fault (PDF). The property covers a 7.5-kilometre section of the Abitibi greenstone belt, including a portion of the PDF, and is thus situated in a highly-prospective setting, geologically similar to the supergiant gold deposits in the Timmins-Porcupine Gold Camp. Strategically positioned between Pan American Silver’s Timmins West mine and GFG Resources’ Pen Gold project, the property has significant potential for both orogenic gold and gold-rich VMS deposits.

1911 Gold is a junior explorer that holds a highly prospective, consolidated land package totalling more than 58,000 hectares within and adjacent to the Archean Rice Lake greenstone belt in Manitoba, and also owns the True North mine and mill complex at Bissett, Manitoba, where it reprocesses historic tailings on a seasonal basis. 1911 Gold believes its land package is a prime exploration opportunity, with potential to develop a mining district centred on the True North complex. The Company also owns the Apex project near Snow Lake, Manitoba and the Tully and Denton-Keefer projects near Timmins, Ontario, and intends to focus on both organic growth opportunities and accretive acquisition opportunities in North America.