TORONTO, Ontario, June 8, 2022 – 1911 Gold Corporation ("1911 Gold" or the "Company") (TSX-V: AUMB) (OTCQX: AUMBF) reports that it has received assay results from 20 drillholes completed in the Tinney and Bidou project areas as part of the first phase of 2022 exploration drilling at its 100%-owned Rice Lake Gold Property in Manitoba.

For 2022, the Company’s exploration program will include two phases of exploration drilling as well as the regional field program with the goal of advancing and expanding our pipeline of projects at Rice Lake, while also advancing the Apex and Denton-Keefer (Timmins, Ontario) properties.

The Company completed 35 drillholes during the initial phase of drilling, totalling 9,202 metres, to test multiple targets at the Bidou, Tinney and Wallace projects on the Rice Lake Gold Property (Figure 1), and to test several targets on the Apex (Snow Lake) Gold Property in northern Manitoba. 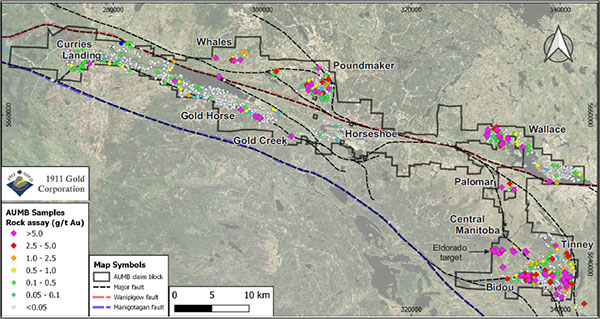 The Company completed 5,028 metres of exploration drilling at Tinney and Bidou, including 12 drillholes (3,245 metres) to follow-up on four priority targets from the Company’s previous drilling, and 8 drillholes (1,783 metres) to test four new targets generated by the field exploration program (Table 1).

Table 1: Assay results from 2022 exploration drilling at the Tinney and Bidou projects. 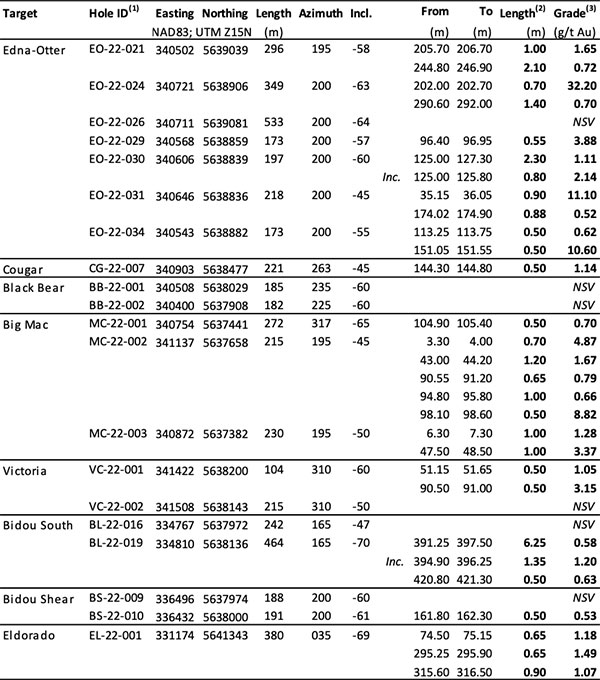 Exploration drilling at Tinney focused on the northern section of the Gunnar porphyry intrusion, testing favourable structures in the porphyry and its host rocks, over a strike length of 1.8 kilometres (Figure 2). Previous drilling by the Company indicates that the porphyry was a significant conduit for gold-bearing fluids, analogous to Sigma-Lamaque in the Val d’Or camp, with extensive quartz vein systems associated with pervasive alteration and local high-grade gold. 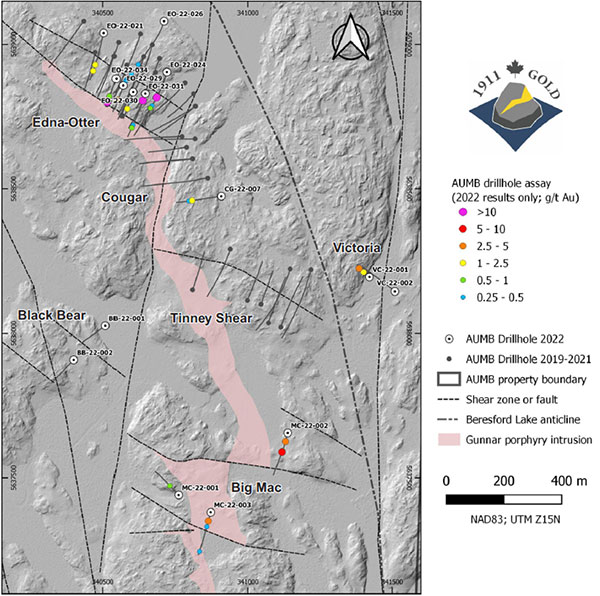 Drilling at the Edna-Otter target had three objectives:

Drillhole EO-22-026 — the deepest yet completed at Edna-Otter at 533 metres — intersected the porphyry over a core length of 145 metres, from 334 metres downhole, encountering over 70 metres of sheeted quartz veins, alteration and sulphide mineralization that returned sporadic anomalous values up to 0.4 g/t gold, thus confirming the mineral system continues to depth.

Drillhole EO-22-024 tested down-plunge to the northeast on the porphyry, yielding 32.2 g/t gold over 0.7 metres from a laminated quartz vein with visible gold just above the upper contact.

Although the shallow fence of drillholes consistently intersected the modeled structure at the upper contact of the porphyry, assays yielded erratic gold values over narrow widths. Steep and flat veins adjacent to the target structure returned local high-grade intercepts over narrow widths (11.1 g/t gold over 0.9 metres in EO-22-031; 10.6 g/t gold over 0.5 metres in EO-22-034), highlighting the complexity of structures and veins within the porphyry.

Newly acquired data from the 2022 drilling at Edna-Otter will be utilized to revise and enhance the 3D model for this target and evaluate additional drill targets.

One drillhole was completed at the Cougar target (located immediately south of Edna-Otter along the Gunnar porphyry) to test for continuity of high-grade zones (e.g., 9.3 g/t gold over 2.6 metres in CG-20-001; see Press Release dated April 30, 2020) at the upper and lower contacts of the porphyry.

Drillhole CG-22-007 intersected thick intervals of shear deformation, alteration and quartz veins at both contacts of the porphyry; a laminated vein near the upper contact contained a few specks of visible gold and returned 1.14 g/t gold over 0.5 metres. These structures remain open along strike to the south and to depth.

The Company completed seven drillholes, targeting large-scale structures adjacent to and cutting the Gunnar porphyry, as defined by outcrop mapping and LiDAR interpretation, and with associated gold in outcrop and surficial sediments. Drilling specifically targeted bends or offsets of geological units along these structures, none of which had previously been tested by drilling. 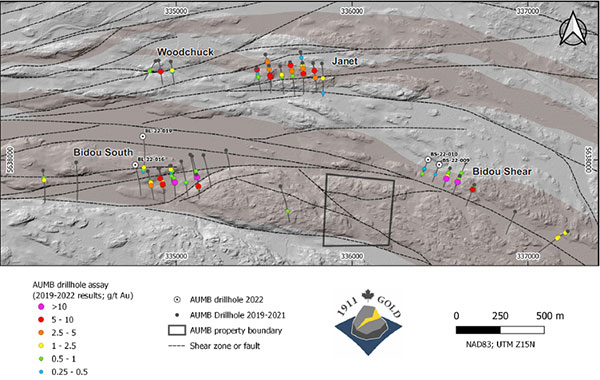 Drillhole BL-22-019 targeted the intersection between layered gabbro and a cross-cutting structure at a vertical depth of approximately 400 metres, making this the deepest drillhole completed to date on this target. The drillhole intersected nine metres of intensely sheared, altered, quartz-veined and sulphidized (pyrite, pyrrhotite, chalcopyrite, sphalerite) gabbro, approximately 10 metres above the targeted depth. This zone yielded consistent elevated gold values over 6.3 metres, with a weighted average grade of 0.6 g/t gold over that interval, confirming that the targeted structure remains open down plunge and along strike at this depth, and is gold-bearing.

Drillhole BL-22-016 tested the same structure near surface, stepping out along strike to the west of previous drilling, but did not yield significant assay results.

Two drillholes (BS-22-009, -010) were completed along strike to the west of previous drillholes at Bidou Shear, to test a major structure hosted by a panel of sedimentary rocks between two gabbro sills. Both drillholes intersected the targeted structure, defined by over 10 metres of strongly sheared, altered and quartz-veined sedimentary rocks, with BS-22-010 returning 0.5 g/t gold over 0.5 metres.

The Eldorado structure (see Figure 1 for general location) ranges from 1 to 2 metres wide at surface and is traced by mapping for over 700 metres along strike, with veins and stringers of quartz containing localized high-grade gold over its entire strike length. In the 1930s, Eldorado was developed on three levels underground via a vertical shaft, but was never brought into production.

Three drillholes were designed to test the main structure below the workings, in locations down-plunge from high-grade gold showings on surface and major flexures in the structure. One drillhole (EL-22-001) was completed in the first phase of drilling, intersecting three narrow zones of gold mineralization, the deepest of which, representing the main structure, returned 1.1 g/t gold over 0.9 metres, thus confirming the structure is open, albeit narrow, at depth.

Fieldwork is underway in a number of project areas on the Rice Lake property, including the Palomar and Central Manitoba projects where early reconnaissance sampling has returned high-grade gold values from quartz veins in outcrop, representing priority areas for follow-up. Data acquisition is also underway at the Denton-Keefer property located 30 km southwest of Timmins, Ontario, along the prolific Porcupine-Destor fault, with UAV LiDAR to be followed by heli-borne magnetic and electromagnetic surveys.

Sample handling, preparation and analysis are monitored through the implementation of formal chain-of-custody procedures and quality assurance-quality control (QA-QC) programs designed to follow industry best practices. Drillcore is logged and sampled in a secure facility located in Bissett, Manitoba. Drillcore samples for gold assay are cut in half using a diamond saw and are submitted to Activation Laboratories Ltd. (Actlabs) in Ancastor, Ontario, for preparation by crushing to 80% passing 2 millimetres, riffle splitting to obtain 250-gram aliquots, and pulverizing to 95% passing 106 microns. Pulps are analyzed by a 30-gram fire assay and AAS finish. For assays above 5 g/t Au, a cut of the original pulp is re-assayed with a gravimetric finish. Samples with visible gold are analyzed by metallic screen assay. In addition to Actlabs’ in-house QA-QC protocols, 1911 Gold inserts certified standards, non-certified blanks and field duplicates into the sample stream at regular intervals, such that QA-QC accounts for 10% of the total samples submitted. Results are routinely evaluated for accuracy, precision and contamination.

1911 Gold is a junior explorer that holds a highly prospective, consolidated land package totalling more than 58,000 hectares within and adjacent to the Rice Lake greenstone belt in Manitoba, and also owns the True North mine and mill complex at Bissett, Manitoba, where it reprocesses historic tailings on a seasonal basis. 1911 Gold believes its land package is a prime exploration opportunity, with potential to develop a mining district centred on the True North complex. The Company also owns the Apex project near Snow Lake, Manitoba and the Tully and Denton-Keefer projects near Timmins, Ontario, and intends to focus on both organic growth opportunities and accretive acquisition opportunities in North America.